Capsule Wardrobe: A term coined by Susie Faux, referring to a collection of a few essential items of clothing that don't go out of fashion, such as skirts, trousers, and coats, which can then be augmented with seasonal pieces. I was watching the documentary “The...
Read More

Are YOU a High Performer? 🕵🏽

The Army has released AIM (Assignment Interactive Module) 2.0 as a new way of managing its number one asset…people. AIM is a new Talent Management system that brings the Army’s talent management into the technology age and allows a soldier-centric selection process for selecting assignments.

If you are a US Army officer looking at a new assignment during the upcoming 2020 PCS cycle, you already know about AIM 2.0 and are in the middle of navigating a brand-new, first of its kind system. This article highlights my tips on how to stand out during the AIM application process and increase your chances of getting the job you want in your desired location.

AIM 2.0 is a lot like Tinder i.e., “swipe right if you like me” and if both parties swipe right…ding, ding, ding! The AIM marketplace imitates a traditional private sector hiring process where companies and applicants must find each other. Then they exchange information and move on to the meat and bones – competing for the job. Here’s how it works:

Soldiers don’t know how to write resumes. I won’t name any names, ahem… but when I saw my husband’s first attempt at a resume and cover letter I almost died. I’ve already had my hands on quite a few AIM resumes and let’s just say that they’re all awful.

Soldiers don’t know how to brag. The number one problem I’ve seen in working with thousands of soldiers is that you’re too humble. A resume is designed for you to highlight accomplishments, NOT explain your jobs. If you tell a hiring manager what you did (boring and not helpful), you’re losing an opportunity because they’re going to hire the person that brags a little. More importantly, you need to explain your impact on their unit and how it improved the Army/DOD’s overall mission.

AIM 2.0 is NEW. We’re navigating murky waters here; nobody knows what the heck is going on. Soldiers and units understand the second and third–order effects of being the guinea pig on a complex hiring system overhaul. Literally, AIM could ruin a soldier’s career, or put the wrong person in the wrong job.

Soldiers aren’t getting help with AIM documents. The guidance I’ve seen involves some cute little cartoon videos explaining how the new system works and a couple of lackluster examples of a resume and cover letter. YOUR CAREER IS ON THE LINE. Your bad AIM resume and cover letter puts A LOT at stake for your military career.

Here are a few tips to help you.

Don’t get stuck at Fort Polk.

If you don’t want to get stuck at Fort Polk, Louisiana, consider getting professional help on your AIM resume and cover letter. I have already got my hands on quite a few AIM 2.0 applications letters and given them an overhaul allowing soldiers to shine.

At Begin Within, we speak military. Over 70% of our clients are in the military community, and ALL of our staff are military spouses or veterans. We don’t want you to get stuck in an awful job at a terrible duty station. We’ve got your back and want to showcase you and your professional aspirations. 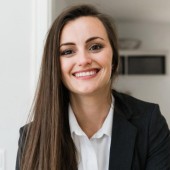 Jaime Chapman is the Founder & CEO of Begin Within, published author and the Career & Employment Advocate for tens of thousands of military spouses.

Career Changes: How to talk to your children February 4, 2020

Get the latest news

Begin Within provides holistic career services that focus on candidate fulfillment and satisfaction in addition to the challenge of a career that’s right for you. We want you to say “I’ve never worked a day” even when you are working tirelessly to fulfill your passion. We also want you to attain the compensation and work/life balance you deserve. There is nothing like feeling energized after a hard days work, knowing that your career is in synergy with your why.